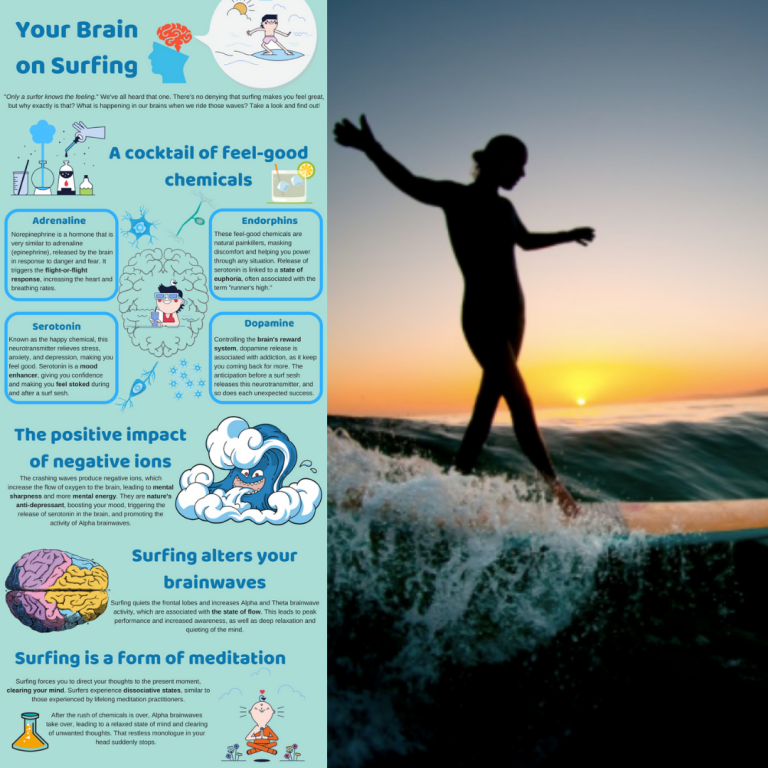 Here is a great read we found on https://www.booksurfcamps.com/news/surfing-impact-brain-mood

Surfing feels good. There’s no denying that. Time slows down when you’re riding a wave, you don’t really think about anything and the rest of the world just vanishes. You are in awe. You are in the flow. But what does that mean, and how does that translate into your brain activity?

Our mind is the ultimate puppet master. It controls our emotions, fears, decisions and thoughts, our motivation and energy levels. What if we understood more about how our brain works? Would we be able to trick it into working more to our advantage?

Exercising in natural environments has greater benefits for your mental health than exercising anywhere else. The same goes with surfing, a total workout that engages both the body and the mind, with health benefits that go far beyond the sheer thrill of catching a wave – it can be a form of treatment for depression, stress, anxiety, insomnia, and even post-traumatic stress disorder.

Have you ever wondered what goes on in your brain when you surf? Looking for the science, logic, and reasoning behind the stoke you experience when out in the water? We often hear that “Only a surfer knows the feeling” and “There’s no greater high,” but that never seems to satisfy us. So, we’ve decided to get to the bottom of things and to take close look at what happens inside a surfer’s brain. Well, not literally, but we do have some interesting answers for you!

Surfing releases a cocktail of feel-good chemicals into your brain

According to Harvard Medical School, regular exercise improves memory by stimulating certain chemicals in the brain, which, in turn, help new blood vessels to grow and brain cells to survive. It also improves sleep and mood, and reduces stress and anxiety. The same happens when you surf – the brain gets a good shot of some cool chemicals.

This cocktail of chemicals helps you stay focused. Not only that, but it also makes you feel happy. Therefore, it is safe to say that surfing is a strong mood enhancer. Each great feat of catching a new wave is rewarded accordingly, with a rush of neurochemicals that lead to a state of euphoria, often associated with the term “runner’s high.”

Let’s take a look at some of the chemicals being released:

Adrenaline – In medical terms, this is called epinephrine, and is being produced by the adrenal glands in response to danger and fear. There is another hormone, very similar to adrenaline, called norepinephrine, which is produced by the brain. Just like adrenaline, it triggers the fight-or-flight response, increasing the heart rate, the breathing rate, and the blood flow, helping you deal with stressful situations.

Serotonin – Also known as the “happy chemical,” this neurotransmitter is responsible for our mood. Low levels of serotonin are associated with anxiety and depression, and higher levels of this mood enhancer reduce stress and increase your overall confidence. It is also responsible for that stoke you experience during and after a surf session.

Endorphins – These feel-good chemicals are often referred to as the body’s natural painkillers, masking pain and discomfort, and helping you power through any situation. Release of endorphins is also linked to a state of euphoria. In fact, surfing is used in rehab facilities, where the high from drugs and alcohol is replaced with the endorphin rush one experiences when riding a wave.

Dopamine – Even more powerful than endorphins, this neurotransmitter controls the brain’s reward and pleasure centers. The anticipation before a surf session releases dopamine, with incredibly high amounts being produced as the result of an unexpected success, such as catching your first wave or riding that gnarly peak you never thought you could. Dopamine is associated with addiction because it keeps you coming back for more.

The positive impact of negative ions

For centuries, doctors have recommended beach sessions to their patients. The ocean has a naturally soothing effect on the brain, and simply being around crashing waves will make us feel at ease and happy. But have you ever wondered why this happens?

The crashing waves release negatively charged ions, which trigger the release of feel-good chemicals in the body and alter the brainwaves. Negative ions cannot be seen with the naked eye or smelled, but they are around us in certain environments, especially around large bodies of water. To be more precise, these are oxygen atoms with negatively charged electrons that are produced through water molecules.

Negative ions are nature’s anti-depressant, triggering the release of serotonin and endorphins, those magical neurotransmitters that relieve stress and make us feel good. Negative ions increase the flow of oxygen to the brain, which leads to mental sharpness and increased mental energy. They also promote the activity of Alpha brainwaves (keep reading to find out more about these). Therefore, it’s not just the pleasure of catching a wave that will put a smile on your face, but also the air you breathe.

The breathing patterns used when swimming and diving stimulate the parasympathetic nervous system. This has an impact on the brainwaves and calms the mind, releasing hormones that make you feel positive.

There are five types of brainwaves. In order from fastest to slowest, these are Gamma, Beta, Alpha, Theta, and Delta. Whenever we feel tired and lazy, the more sluggish brainwaves are dominant. When we feel alert and energized, the faster brainwaves are in action. When being faced with a wave, you need to be focused on the task at hand, and the brainwaves start to move faster.

Beta waves – come into play when a sharper state of alertness, logic, or reasoning is necessary. Beta waves are associated with increased focus, but too much Beta waves can also lead to higher levels of stress.

Alpha waves – when we are relaxed or daydreaming, the Alpha waves are “to blame”. This frequency is at the borderline between the conscious and subconscious mind – when Alpha waves take over, we experience the flow state.

Theta waves – usually occur during sleep, but can also take over during deep meditation. Theta waves allow us to process information beyond our normal consciousness awareness, improving our creativity and intuition. Along with Alpha waves, Theta waves help you enter the flow state.

Delta waves – the slowest and the loudest brainwaves, these dominate during dreamless sleep or transcendental meditation.

When focusing on a task, be it catching the next wave, writing a great paper, or delivering an awesome project at work, we start with Beta waves and slowly progress towards Alpha and Tetha. When Alpha wave activity increases, we are reaching our peak performance. When intense creativity is involved, Theta waves come into play and we get an “aha! moment” – that precious moment of brilliant ideas, when we are able to connect all the dots.

Surfing is a form of meditation

We know now that meditation doesn’t necessarily imply sitting still in a quiet room on a braided cushion. It can take many forms, and surfing is one of them.

Simply gazing at the ocean puts you in a meditative state. Once you get in the water, surfing forces you to direct your thoughts to the present moment, clearing your mind. Surfers undergo dissociative states, similar to those experienced by lifelong meditation practitioners.

After the rush of chemicals in the brain, the parasympathetic system takes over and everything slows down, while cortisol (stress hormone) production stops. Alpha brainwave activity dominates, which translates into a relaxed state of mind and clearing of unwanted thoughts. That restless monologue in your head suddenly stops.

Surfers continue to feel good long after a surfing session and will be able to focus better on all the other tasks they are faced with. 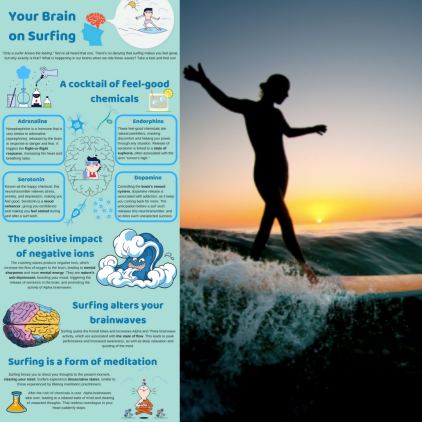 We cannot really tell what goes on in every single surfer’s brain; that would imply mapping their brains, and we can’t exactly hook a surfer to an MRI while inside a barrel. We are all unique, and what we feel in a particular moment is influenced by our life experience and by the different challenges we face. What a beginner surfermay see as over their limit might seem too easy for a pro. But in the end, it is the diversity of the experience that makes surfing such an amazing sport.

Get your shot of all-natural feel-good chemicals more often. Embark on regular surf weekends and try to squeeze in a session or two during the week if you can!

"Serene Waters has provided an invaluable service to both our clinicians and our clients. The clinical experience that governs the adventure therapy ensures that in addition to having the opportunity to enjoy some of California’s natural beauty, our clients are also receiving skills training which ties directly into the rest of their treatment. Beyond the benefit for the clients, our clinicians have the opportunity to collaborate and complete tasks of case management while the clients are engaged in a therapeutic experience. The addition of services provided by Serene Waters has added more value and scope to the treatment provided at New Method Wellness." -Doug Plieman, M.S.W., CADC-II Program Director of New Method Wellness (as seen on Dr. Phil and A&E).

“We have been utilizing Serene Waters Adventure Therapy for our clients that are newly in recovery for Mental Health, Chemical Dependency and Trauma. James and his staff has been nothing but superb and when it comes to meeting our clients where they’re at. They make the effort to engage with each individual client while maintaining safety for the ocean and challenging them to try something new and stay out of the comfort zone. The therapeutic value that they have found through their surfing experiences have made a huge difference in our clients lives.” - Marissa Murray, Program Director , Rising Roads Recovery for Women

"I can't say enough about James and the wonderful experience my daughter had with him. She was struggling with depression and each time we had a lesson she felt better and better. James is a wonderful, patient teacher who gives an tailor made lesson to what you are looking for. He helped her find the quiet in her mind and how to be in the present moment which was exactly what she needed. I highly recommend James if you are looking to learn to surf and/or need some help with feeling better and learning to be present." -Parent of a Client

"James works with our kids at Sustain Recovery and does an awesome job! It's truly amazing work he's doing with our kids. He doesn't just take the kids surfing. He actually processes the therapeutic components to surfing that relate to challenges that they are facing in their daily recovery. I would highly recommend him to anyone looking to expand the experiential component of their clinical program!" -Kyle Carter, Co-Founder of Sustain Recovery Services

"I am honored to write a recommendation for James, for the simple fact that he brings a very ethical experience to his work with clients. His love and compassion for the helping profession is contagious. His passion for surfing allows clients to want to participate and learn something new. Applying his clinical experience to his surf groups allows clients to see recovery in a different sense then they may not have been seeing it as. The level of empathy that he brings allows clients to have a safe place to open up in. Thank you for your hard work" -Patt Ochoa, CADC-II Founder of 11:11 Intervention Inc.

"I have been working with Serene Waters for several years now. They have become a huge part of our program, in showing and teaching our clients how to have fun in sobriety and learn new healthy hobbies! I also appreciate their professionalism and heart to help people in recovery!" -Stephen Carmel, Founder/ CEO California Prime Recovery